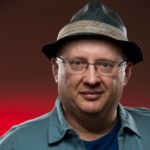 In the gaming world, Joe most recently worked on World of Warcraft: Battle For Azeroth. He voiced (another!) Chloe’s father, William Price in Life Is Strange, and voiced (and motion-captured) Professor Harold MacDougall in Red Dead Redemption and its Undead Nightmare DLC. He also voiced roles in Fallout 4, Dishonored 2, World of Final Fantasy, Kingdom Hearts HD 2.5 Remix, Call of Duty: Advanced Warfare, The Evil Within, Murdered: Soul Sacrifice, Lichdom: Battlemage, Diablo III, Command & Conquer 4 and many more. He has several huge upcoming titles he’s not allowed to reveal… at pain of death.

On camera on TV, he guest starred on Disney Channel’s Best Friends Whenever, Bones on Fox, Showtime’s House of Lies and Weeds, and Criminal Minds: Suspect Behavior for CBS. Joe recurred as a guest star on CSI and Sleeper Cell. He has shown up on Buffy the Vampire Slayer, Lois & Clark, Seinfeld, Will & Grace, House, West Wing, NYPD Blue, Desperate Housewives, That’s My Bush and many others.

In film, he has worked on Blumhouse’s Truth Or Dare and The Purge:Anarchy, Never Been Kissed, Space Jam, Officer Down and a bunch of indie films: Saving Lincoln, House of the Rising Sun, Black And Blue, Dead Game and Donald And Dot Clock Found Dead In Their Home,among others. In animated film, he appeared in the Oscar-nominated Ernest & Celestine,the National Film Award winning Delhi Safari and the Annie and Cesar Award winning Zarafa.

The stage has always been Joe’s first love, though, and he has fulfilled that romance in dozens of plays. He also writes for film and TV, coaches acting to an eclectic celebrity clientele (including Guardians Of The Galaxy’s Dave Bautista and rock legend Alan Parsons), and is an award winning stage director.  Learn more at www.joeochman.com