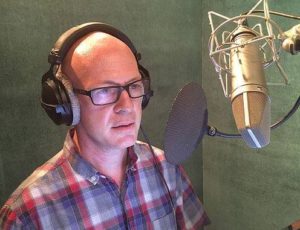 Derek Stephen Prince, aka Steve, has been in the voiceover industry 23 years. His career spans across such shows as Power Rangers Turbo, Power Rangers In Space, Power Rangers Lost Galaxy, Power Rangers Time Force & Power Rangers Wild Force; Digimon: Seasons 1-4 & 6-7 playing such favorites as Digimon Emperor, Veemon, Beelzamon, Impmon, Piedmon and most recently Jeremy, to name a few; Love, Hina where he played Keitaro; Bleach, where he played Uryu Ishida; and Naruto, where he STILL plays Shino Aburame (my God, does this show not end???); and Guts the pug in Kill La Kill.

Video games include the Kingdom Hearts series as Vexen; Odin Sphere as Oswald; Operation Darkness as Adolf Hitler and Jack the Ripper; and Kokichi Ouma in Dangan Rompa 3.

“Steve” was in the original cartoon series of Lilo & Stich as Loki the shaved ice vendor; Little, Big, Awesome for Amazon; NFL Rush Zone – Guardians Unleashed as Jackson; the film Jungle Shuffle with Rob Schneider and Drake Bell as Louca the toucan; and the film Bling where he played the ring vendor, opposite Taylor Kitsch. Both movies are available through Amazon Prime.

You can currently see him on Cartoon Network as Iggy the Boston Terrier in Jojo’s Bizarre Adventures – Stardust Crusaders. This year, celebrate with Steve as Cowboy Bebop celebrates its 20th Anniversary. Steve played Lin, for those of you who remember the show. Steve has a LOT of things in store for you with his panels, and can’t wait to see all of you at Fangaea!

Steve will be featured in the following panels: